A V-twin 90° liquid-cooled four-stroke gasoline engine with a vertical PTO shaft is the Kawasaki FD590V.

The FD590V is an overhead valve engine with cast iron cylinder liners, a horizontal draught carburetor with a fixed main jet, a mechanical diaphragm fuel pump, a full transistor ignition system with set timing, and a mechanical governor. 18.0 HP (13.4 kW) at 3,600 rpm and 41.5 Nm (4.23 kgm; 30.63 ftlb) of torque are produced by the Kawasaki FD590V. 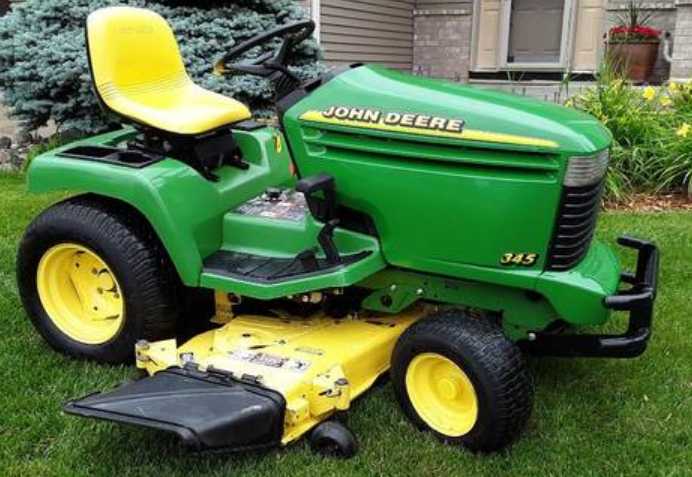 One of Deere and Company’s top garden tractors is the John Deere 345, or JD345 for short.

This garden tractor, which was introduced in 1995, is utilized by many homeowners with sizable yards as well as businesses that maintain playing fields and golf courses.

JD345 can facilitate tasks like mowing and pruning as well as other gardening tasks. This garden tractor is of a very good caliber and has many necessary functions.

It utilizes Kawasaki dual-cylinder gasoline engines and hydraulic lift integration. You are so assured of its dependability.

Because it is well-built and equipped with modern amenities, the John Deere 345 is the kind of garden tractor that can be used for many years. In fact, it is regarded as one of Deere & Company’s most sought-after garden tractors.

What years did they make John Deere 345?

How many horsepower is a John Deere 345?

What transmission is in a John Deere 345?