Cub tractors are great to ride and, even though some may be hesitant about certain parts, they offer a lot of value for money. Cub Cadet’s LT1045 lawn tractor has a Kohler courage motor.

The lawn tractor is a 4×2 2-wheel drive that can produce smooth transitions and movements. The ease of use of this lawn tractor is evident immediately thanks to its hydro gear 0510 transmissions.

Cub Cadet is a top-selling tractor brand worldwide. It is also known for being more affordable, but this doesn’t diminish its effectiveness.

Although the Cub Cadet LT1045 has been discontinued over a decade ago many people still want to purchase this tractor for their lawns.

This page will provide all information, including style and features. 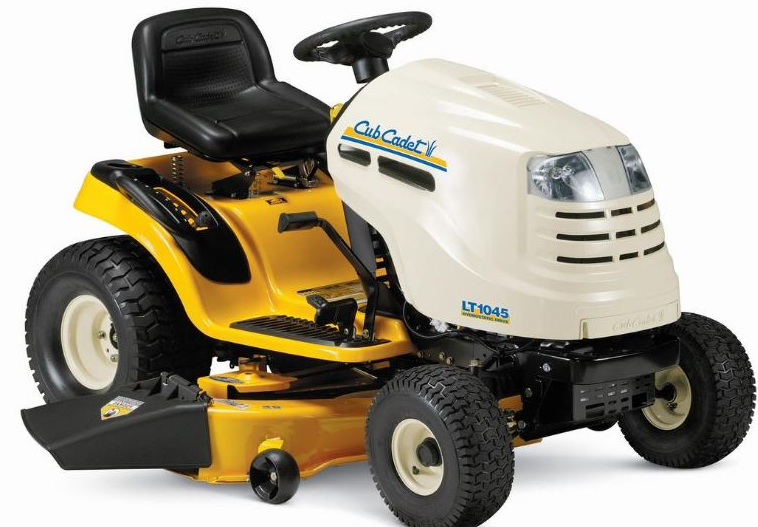 Cub Cadet LT1045 tractor is still quite recent, considering that it was still in production at the time of its release in 2008.

The tractor has a modern, sleek appearance while still maintaining the cub cadet style.

This riding mower uses a Kohler Courage SV600 four-stroke engine that is air-cooled. It is crucial to tractor operation because it dictates how much you can do with it.

The cub cadet realized this and installed a 19HP engine into the LT 1045. This is a good engine for a lawn tractor and should provide more power over a longer period of time.

What level of safety should a tractor provide for the operator and other users? Many tractor users are interested in this information.

Tractors are a huge investment and should be discarded after more than 10 years of service. But a tractor that has low-quality parts and a lack of durability won’t last for that long.

It will be required to replace parts until the tractor is totally degraded.

The tractor comes with an extremely comfortable seat that has a high backrest so that the user doesn’t develop back pain after operating the tractor for a long time.

The controls are simple to reach via the dashboard, and the brakes and levers can all be reached without stretching or strain.

Cut Cadet LT 1045 is equipped with the hydro gear 0510 model of transmission that has a type of hydrostatic transmission.

The features of the transmission that are used in this tractor guarantee efficient transmission of the power to the other parts and in the correct proportions.

There are three main attachments for the cub cadet LT1045 lawn tractor. The attachments include blades, a snowblower, and a mower deck.

These will help the tractor be more efficient since you’ll be able to perform more work on your lawn.

The good thing is this model has an impressive engine as well as optimized parts, which makes these simple. These attachments are described in greater detail:

It is situated at the center of the cub cadet and is referred to in the middle mount. Its cutting length of 46 inches and is comprised of three blades.

It has an automatic lift that can lift or lower the deck of the mower to allow you to reach the grass you want.

Should you purchase the item or do you not? That’s the main question on lots of minds. This lawn mower is constructed with impressive performance and transmission capabilities that permit greater use, including the use of multiple attachments.

It’s at a that makes it an automatic purchase in the event that you purchase a tractor that is in good condition.

How many belts does the Cub Cadet LT1045 have?

The Cub Cadet LT1045 includes 2 belts that, as time passes, will require to be replaced when their rubber wears down.