If you’re looking for John Deere Gator 835M Problems and their solutions, you’ve come to the right place. Our team has confirmed this information with several John Deere representatives and associates.

Let’s talk about the John Deere Gator 835M Problems and their solutions. Finding complete information on the internet can be challenging.

Therefore, we prefer that you save your precious energy and time. Our team has compiled complete information on John Deere Gator 835M Problems to make your search easier. 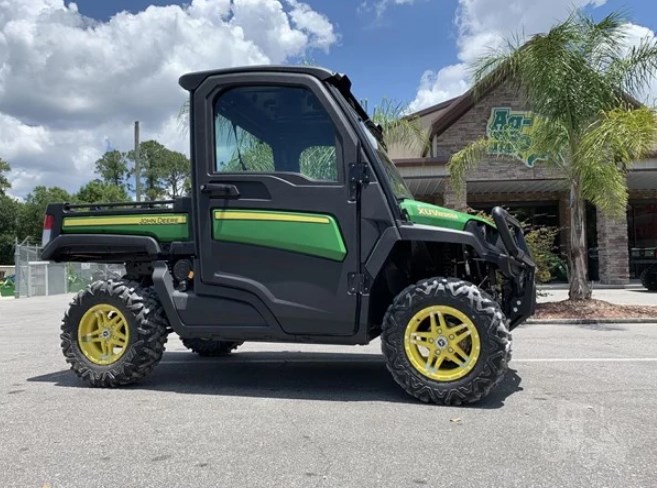 This John Deere Gator XUV is an excellent choice for people who want a car that isn’t expensive or the most basic. You can change a lot about it before buying it, so if you’re thinking about getting one, check out its features.

It also has power steering, which is different from the 835E, and is why many people are willing to pay more for the better model.

Even though it has many great features, people who have worked with this John Deere XUV have reported different problems, some of which are common and some unique to this model.

Let’s talk about the most common problems with the John Deere Gator 835M and (where possible) how to fix them.

Unlike most John Deere tractors, the Gator 835M has a valuable cargo box that can be lifted occasionally.

But some users said they had trouble lifting this rear box. When weight is on the cargo bed, the ability to lift goes down to zero.

Sometimes, you can’t lift the back box even when it’s not carrying anything heavy.

There could be many reasons for this problem, but it’s usually fixed by replacing the motor clutch or tightening a loose connection in the lift mechanism.

If the problem is with the clutch, check to see if the seals can be used again before replacing the clutch. Also, make sure to take it apart the right way. If you’re not sure if you can do this work, hire a pro to do it for you.

People have said that this John Deere model won’t start because of a bad ground wire. A ground wire connects the electrical system to the power source, which completes the circuit.

When you have a bad ground wire, you may have different problems, such as the ignition not working.

If you can’t start your gator or it takes more than one try with the ignition switch, it could be because the ground wire is broken or the primary wire came loose from the connector.

You will need to check the electrical system, but it would be better to have a professional look at it.

Even though there is no long-term solution, this strange problem is common enough to be on our list.

People have said that their Gator 835M windows make creaking noises when moving, which is a little unsettling and could be a sign of a bigger problem with how the car is made.

Also, it looks like some people have had problems with the door, which doesn’t close as well as it should.

While your gator was running, you might have noticed that a lot of air was coming in through where the hinge was, which shouldn’t happen.

For the second problem, you might be able to fix it quickly with rubber seal cream, but you should still tell your John Deere dealer about it because it’s a big mistake on their part.

This problem hasn’t been reported too often with gator vehicles, but some owners have said that the seals on the front axle are leaking.

Two things can cause an axle to leak: either it wasn’t put on right the first time, it was put on again, or it has worn out over time.

If your front axle leaks, you should fix it as soon as possible because it’s dangerous to drive your gator in this state.

You might notice this leaking problem when you park your gator. However, the leaking sometimes starts at a certain speed, so you might not notice it in the driveway or parking spot.

If the leaking isn’t too bad, you can keep driving as long as the transmission fluid is at the right level. But we suggest you replace or fix the leaking parts as soon as possible.

The first drive could be pretty scary for people who have never used a gator before. Some John Deere buyers have said that their Gator 835M won’t start running until they push the relatively low throttle between 1700 and 1800 RPM.

Below that RPM, the 835M Gator doesn’t move at all, not even in reverse.

Even though it might be scary because a John Deere Gator UTV feels like a car and should start as soon as the throttle is pushed, this is normal for this type of vehicle.

The John Deere 835M Gator starts up “early” compared to many other gas-powered vehicles, which don’t start moving until they reach over 2000RPM.

So, this isn’t a problem; you need to get used to it the first few times you ride.

If you’ve ever put a glass windshield on your gator utility vehicle, you might know about this problem.

Many users say that when they try to latch the windshield shut, the glass won’t close tightly and doesn’t seal against the ROPS.

Because it’s hard to engage, it’s easy to put the windshield on the wrong way. If you have a brand-new Gator, you don’t want to risk damaging it by trying to force it.

The key to getting it right is to open the latch and pull it further while the tang is over the outer piece. During the warm months, it should be in the forward position to let air through.

I thought I broke my John Deere 835M Gator for good!

Yanmar 3TNV88C-EP is the name of the engine. It has a 2.7-liter engine that can make 25 horsepower.

How much does a John Deere 835m cost?

The John Deere 835m is a utility tractor in the middle range and costs between $40,000 and $60,000. A John Deere PowerTech 4.5L engine that can make up to 85 horsepower powers it. The John Deere e23 transmission on this tractor has two ranges and four speeds.

It has a two-wheel drive and a power steering system that works with water. The fastest the John Deere 835m can go is 25 miles per hour.

How much does a John Deere 835m Weigh?

The John Deere 835m is a commercial zero-turn mower for large lawns and turf. It has a 72-inch cutting width and an 835-inch-square deck. About 1,600 pounds is how much it weighs.

How Can I Avoid These Problems?

If your computer is giving you trouble, there are a few things you can do to try to keep it from happening again. First, ensure that your operating system and any programs you are using have the latest updates and patches.

This will help make sure you have the latest security fixes and any other bug fixes that might be available.

Next, ensure that a good antivirus program is always running on your computer. This will help catch any malware or viruses on your system before they can do any damage.

Lastly, if you’re still having trouble, you might want to call a professional computer repair service for help figuring out what’s wrong.

➡ The business knows about these problems and is working on a solution. In the meantime, they are telling customers to bring their Gators in for service so that the problem can be fixed.